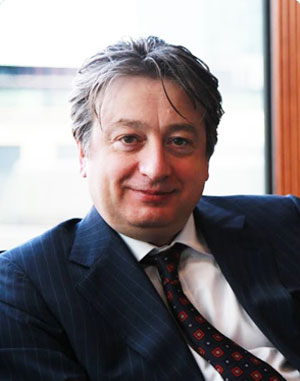 Alongside his business activities, Alexander Temerko is sought after by many major news titles around the world for his views on Russian and European energy markets. His articles and comments have featured in the Financial Times, The Wall Street Journal, The Daily Telegraph, Bloomberg, the BBC, Sky, and other leading newspapers and broadcasters. A keen historian, he is the founder and chairman of a Geneva-based charity that works to preserve world cultural heritage.

Alexander Temerko was born in 1966 in Ukraine, then a constituent republic of the USSR. In 1983, aged 17, he moved to Moscow, where he acquired a degree in electrical engineering. While studying, he worked at several Moscow youth organisations and led the Centre of Student Cooperation.

He began his professional life in the field of environmental science, first as a leading engineer for capital construction at the USSR State Committee for Environment Preservation and then as director of the Environment Preservation Branch at the Forestry Ministry. He was later appointed as general director of the environmental arm of the All-Union Scientific and Industrial Association.

A supporter of the democratic movement, following the collapse of the USSR Alexander Temerko became a key negotiator in the team that formed around Boris Yeltsin. In 1991, he was engaged with the headquarters of the defence force protecting the Russian White House from the military junta, acting as the line of communication with the Soviet military and persuading them to stay neutral.

He was soon invited to join the Defence and Security committee as a member of the management board responsible for the formation of the new Russian military forces. In 1991, he became chairman of the Committee for Social Welfare of Military Personnel, an independent government agency that subsequently became part of the Defence Ministry. The Committee was in charge of pension coverage, the quartering of military personal, and resolving social and residential issues. It was also responsible for drafting legislation on military service and army discharge to the reserve, as well as for managing issues regarding the civilian oversight of the military and its supplies.

Continuing his career as an industrial manager, in 1995 he assumed the leadership of Russkoe Oruzhie, a united corporation that produced armaments for Russian military forces. The corporation’s main aims were to safeguard the most effective military manufacturing operations and to prepare them for privatisation and cooperation with Western industries. He held this post for five years, during which time he qualified as a Bachelor of Jurisprudence, among other honorific titles.

‘A supporter of the democratic movement, Alexander Temerko became a key negotiator in the team that formed around Boris Yeltsin.’

In 2000, Alexander Temerko embarked on a career in Russia’s booming energy sector, taking a position as deputy chairman and member of the board of directors at Yukos Oil Company, with responsibility for government relations, business development and international ventures. Following the arrest of Mikhail Khodorkovsy, he took over as the head of the company’s management following his arrest. In 2004, however, under mounting pressure from the authorities, he was forced to move to the United Kingdom where he continued to fight the growing corruption and despotism of the Russian state. In May 2005, after the illegal expropriation of Yukos assets in favour of Rosneft by Putin’s administration, he left the company to focus on private business ventures and to embark on a political career in the UK.

In 2008, he became director and deputy chairman of Newcastle-based OGN Group, a major provider of engineering and construction services to the offshore oil and gas and renewable energy industries. OGN builds platforms for operations in the North Sea and is active in the development of wind farms, building foundations for offshore turbines. Alexander Temerko is a vocal champion of UK energy security and independence.

‘Alexander Temerko is a vocal advocate for the UK’s energy security and sustainability.’

Alexander Temerko received British citizenship in 2011, and has been a member and valued supporter of the UK Conservative Party since 2012. He is a member of the party’s Leader Group and the current Vice-President of the Cities of London & Westminster Conservative Association, and is an active contributor to other regional party associations. He has received letters of appreciation from Prime Minister David Cameron and party chairman Lord Feldman.

Among his awards and recognitions are a Diploma from the UNESCO Russian National Committee for ‘Prominent Contribution to the UNESCO Project for Preservation of Objects of World Cultural Heritage’, received in 2004; the Mikhail Lomonosov Prize for Outstanding Contribution to the Development of Science, Education, Culture and Arts, received in 2003; the Medal of Order ‘For Services to the Motherland’, of 2nd degree, awarded in 2000; and the ‘Defender of Free Russia’ medal, awarded by Presidential Decree in 1993.

The final battle with the spectre of a past beloved by Putin is now taking place on Ukrainian soil.

For this Putin's enemy, it was time for Europe to wake up

It is vital that Europe can pool its energy resources